The paradox of artistic renderings

Artistic renderings of American Indians most certainly helped frame notions of Indigeneity and solidified how settlers and citizens conceptualized Native America. For example, George Catlin famously painted Indians, showed his work at every opportunity, and published several books that depicted Indian life. Frederic Remington carved out a reputation as one of the most prolific painters and sculptors of Indian life. His works were popularized in late 19th century magazines, most notably Harper’s Weekly, and in myriad exhibitions of his work. Catlin and Remington remain among the most important Western artists depicting Native life.

So, although my prime directive during my fellowship in Washington D.C. was to investigate Native Science, I began to realize that science isn’t a separate pursuit. Indeed, from the Native perspective, science is inextricable from daily life. Science is aligned with culture, language, art, sustenance, spirituality and story-telling. So I gave myself permission to explore the depictions of Indian life at the Smithsonian American Art Museum. 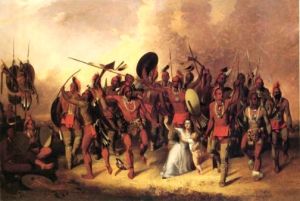 The museum houses breathtaking depictions of the West, with artists ranging from George Catlin to John Mix Stanley. The renderings have an ethereal quality in which the Indians are reverently released onto the canvases. But it’s that very quality—an inchoate quality—that raises the spectre of “the gaze.”

Laura Mulvey popularized “the gaze,” borrowing from Jacques Lacan, to articulate what is being viewed by the observer who witnesses a painting (or film or photo or exhibit). The gaze is an intersection of what the viewer sees and what the painting depicts. That is, the gaze is what we see, paired with the focal point where the artist directs the viewer. An example is an advertisement for auto tires that directs the viewer to a woman clad in a bikini: the gaze is directed at the woman, even though the advertisement is attempting to sell tires.

The paintings of Indian life in the American Art Museum endow the denizens with an angelic quality. The portraits appear to lovingly embrace the chief and warrior. Since the museum allows you to take photos, I shot lots of pics and examined each one, assessing the gaze.

My eye caught an elaborate scene of warriors with weapons aloft against a grey sky illuminated by a bright light. The title reads: Osage Scalp Dance. I read the fine print, which says the artist, John Mix Stanley, painted this “fictional image” while traveling the frontier in 1842 and 1843. The description notes that the artist took license with the “melodramatic tales of scalping” that were popular in the 19th century. At the center of the painting is an unarmed woman clothed in white, raising her right arm, a child at her breast. The denizens, tanned, muscular and bare-chested, seem oblivious to her plight. The gaze rests on the objects in the center: the mother and child. Your eye is drawn to the light from the woman and child, and then to the clutch of handsome warriors, whose expressions are passive, rather than blood-thirsty. One man, whose gaze falls on the woman, aims a weapon at her, but it’s held in check by another denizen wearing a peace medal, whose central position in the painting indicates leadership.

It’s a strange painting that illustrates both threat and protection of the vulnerable woman and child, and the duality of the Indian: he’s warrior and peace-maker.

The caption notes that the scene, invented by the painter, helped remind settlers of the dangers facing settlers: the threat of the Native. And like so much of history, the painter’s and author’s imaginations fashioned scenes and narratives that served the political ends of the immigrants in an effort to rid the country of its denizens.

Professor and researcher at Portland State University who studies science communication, particularly issues that impact American Indians. Dr. Coleman is an enrolled citizen of the Osage Nation.
View all posts by Cynthia Coleman Emery →
This entry was posted in Native Science, Uncategorized. Bookmark the permalink.