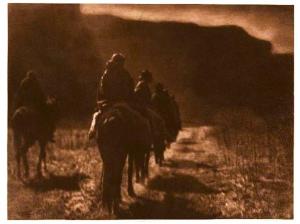 When our girls were little we travelled up and down the Oregon and California coasts to visit relatives.

One day we stopped at a tourist outpost in the redwoods.

The outpost sold American Indian jewelry and crafts manufactured in Taiwan—not unusual and not surprising.

But I was surprised by the title of a children’s book called The Vanishing Race.

I was surprised such a book could be found that announced Indians had vanished.

So when I started graduate studies soon after our coastal journey I decided to work on projects that showed Indians had not vanished.

Armed with scholarships from my tribe and the university, I took a class in public opinion and voting.

I figured this would be a path to study Indian voices.

But when I began looking for research on public opinion, politics and American Indians I found little information.

Undaunted I talked with professors and librarians, unwilling to abandon my cause.

I simply couldn’t find any data—at least not in the 1980s–on public opinion and voting among indigenous North Americans.

I arrived at the unwelcome conclusion that researchers didn’t want to bother with native concerns and politics.

And that strengthened the trope of the vanishing race.