When the Invisible becomes Visible

We found visible the invisible on our recent trip to Chicago.

An exhibit of forgotten black-and-white images by photojournalist Gordon Parks is on display at the Art Institute of Chicago through August.

Parks is famous for his shots of Black denizens in American cities, especially Harlem (New York) of the 1940s and 1950s.

He shot for Life magazine at a time when millions of households across the United States welcomed the publication.

Writing for the Smithsonian, one author says that half of America’s reading public—including school-aged children—would view an issue of Life during the mid-century, making it the most popular weekly.

Parks’ images of Black life brought Harlem to the emerging middle-class families of White America in scenes rarely visible in Boise or Wichita.

Some of the images are painful to behold, like a homeless couple asleep on a doorstep. 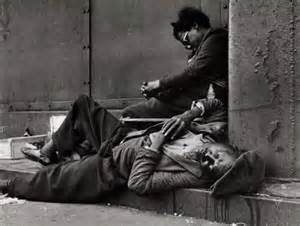 His ironic homage to Grant Wood’s American Gothic (also on display at the Art Institute) places Ella Watson, an African-American cleaning woman (photo above), in the foreground of an American flag, flanked by her mop and broom.

Watson “struggled alone after her mother had died and her father had been killed by a lynch mob,” Parks notes in the caption at the exhibit.

“She had gone through high school, married and become pregnant. Her husband was accidentally shot to death two days before their daughter was born. By the time the daughter was eighteen, she (the daughter) had given birth to two illegitimate children, dying two weeks after the second child’s birth.”

Parks made visible life in cities like Harlem, and his work illuminates the iconoclastic book by Ralph Ellison, The Invisible Man.

The Chicago exhibit pairs Parks with Ellison, joining photos with story-telling along the theme of invisibility.

The duo worked side-by-side to promote the 1952 novel, which won the National Book Award the following year, receiving praise by literary critics and attacks by bigots.

Named one of top 100 novels by the American Library Board, Invisible Man has been banned in public schools since its publication–Pennsylvania, Wisconsin, Washington and North Carolina have had—at one time—forbidden children from reading the book.

The current exhibit continues in Chicago through 28 August.

3 Responses to When the Invisible becomes Visible