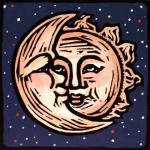 Yesterday’s blog about bloodletting got me to thinking about how the Western scientific paradigm clings mightily to belief systems, making it no less ideological than any other Weltanschauung (worldview).

The example of releasing “bad blood” demonstrates our notions about illness and evilness, and menstruation (the “curse”) epitomizes bloodletting of sinful things. That’s why Margie Profet’s reframing of menstruation as the body’s natural defense against disease—rather than the mere disposal of waste—is so appealing ideologically.

Trained in Western ways of knowing, I couldn’t fathom that the moon influences menstruation: it seemed like a holdover from bloodletting days or a modern myth. And while scientists can’t seem to locate causal effects, the correlation between cycles is insurmountable: women’s cycles match lunar cycles. Period.

Our linguistic traditions enfold women with the lunar, and the lunar is associated with insanity (lunacy) and transformation (such as the werewolf metamorphosis). But if we reframe the myths for a moment, and set aside the notions of lunacy, the relationship between human and nature shows a linkage with the cosmology of Native Science.

Indigenous ways-of-knowing cling unapologetically to interdependence with the physical world: plants, dirt, rocks, rivers, sun, moon, mountains, bugs and animals. So if we shift our lens from separation (viewing relationships as the abstract, objective scientist) to one of inclusion (viewing the relation part of relationships), then the connection between menstrual and moon cycles doesn’t seem so weird after all.

Gregory Cajete writes that “in Native Science, all relationships are related to other relationships” including the non-human. “Tales of creation relate how humans have been formed by and participate with the creative forces of the universe.” Such forces are illustrated by our lunar connection: if you’re willing to embrace it.

1 Response to Linkage to Nature