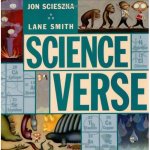 When my kids were little we loved the irreverent storybooks by Jon Scieszka, particularly the Stinky Cheese Man.

So I was delighted to discover at Powells, the best-bookstore-ever, that Scieszka and Lane Smith penned a book called Science Verse.

Mary had a little worm.
She thought it was a chigger.
But everything that Mary ate,
Only made it bigger.

It came with her to school one day,
And gave the kids a fright,
Especially when the teacher said,
“Now that’s a parasite.”

Other gems include take-aways on space and gas.

The book’s interior includes a picture of the periodic table. As I learned at the ScienceOnline2012 conference in January, you can create your name from the elements with a little creative thinking.

So today I learned something new: Dysprosium is a rare element with a silver lustre.

Professor and researcher at Portland State University who studies science communication, particularly issues that impact American Indians. Dr. Coleman is an enrolled citizen of the Osage Nation.
View all posts by Cynthia Coleman Emery →
This entry was posted in science, science communication, writing and tagged rhetoric, science. Bookmark the permalink.