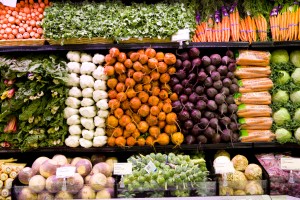 The card on the snack bar announced our local grocery store’s campaign to link values with value.

So I tried to untangle the meanings beneath value and values.

Value means you get your dollar’s worth.

But what do values mean for the upscale market that appeals to folks who can afford organic vegetables, free-range animal products, homemade pastries and fair trade coffee?

We’re hungrier for them than we ever realized.
We want to know where things come from.
We care what happens to them along the way.

We want to trust our sources.
We want to have the information to make meaningful choices
about what we decide to buy and support.
We want people, and animals, and the places
our food comes from to be treated fairly.

The time is ripe.

We are part of a growing consciousness that’s bigger than food—
one that champions what’s good, and the greater good, too.

Where value is inseparable from values.

At first blush, the copy reads like sweet idealism: We want people, and animals, and the places our food comes from to be treated fairly.

You can’t argue with that logic.

As I drilled down to make sense of what the store was telling me, I began to lose sight of the point of the narrative.

It began to sound vague.

Where value is inseparable from values.

Sounds to me that, if we adopt this perspective, we give ourselves permission to shell out more cash to match our values.

If our values embrace meaningful choices then the value of those choices is measured by our principles, not by our wallets.

Seems that, like all creative propaganda, we are encouraged to spend more to feel better about ourselves.

We can soothe the savage ego with material goods.

And the most powerful meaning underlying the message is the emphasis on wanting.

Let’s view this in a different context.

The store’s mantra centers around our desires and fulfilling these desires.

But this sort of craving, according to Buddhist teaching, leads to sorrow and disappointment.

I’d rather see a more transparent message than the opaque propaganda nesting on the café table.

And that brings me back to Sioux tribal values: respect, compassion, honesty, generosity, caring, humility and wisdom.

Armed with tribal values, we can move the emphasis from wanting to doing.