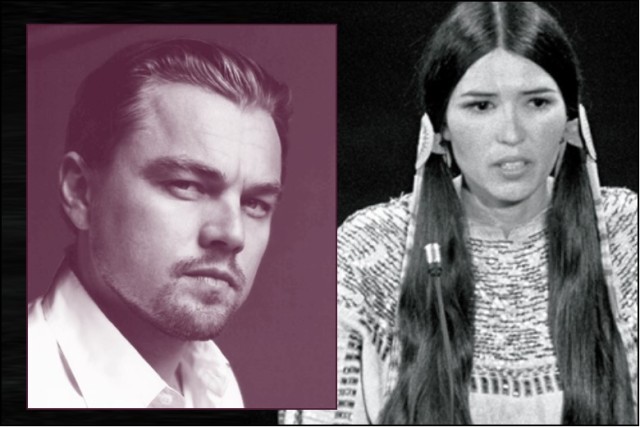 Sacheen Littlefeather at the 1973 Oscars and Leonardo DiCaprio (inset)

Leonardo DiCaprio’s acceptance speech for Best Actor at Sunday’s Academy Awards ceremony turned into a Rorschach test for viewers: you heard what you wanted to hear.

After thanking The Revenant team, DiCaprio focused on climate change. He told 34.3 million viewers—that’s nearly one out of every three households—that “climate change is real; it is happening right now.”

The Twitter world erupted with a record number of posts from Hollywood’s broadcast at Dolby Theatre: 440,000 tweets in 60 seconds, according to news reports.

Advocates of the science of climate change praised the speech: Bill Nye said “he told the truth,” while the animal rights organization PETA called climate change “an important issue.”

Others mocked the speech.

Dominic Patten, an actor who writes for deadline.com, said DiCaprio “contributed to climate change with that hot air speech of his about the environment.”

If you have time to wade through the tweets, you’ll see that DiCaprio honored First Nations people and acknowledged that indigenous folk bear the brunt of climate change in their communities.

But the shout-out to Native people got drowned out by the applause and the orchestra.

“Lastly, I want to share this award with all the First Nations people represented in this film and all the indigenous communities around the world,” DiCaprio shouted over the din.

“It is time that we recognize your history and that we protect your indigenous lands from corporate interests and people that are out there to exploit them. It is time that we heard your voice and protected this planet for future generations.”

The reaction to using his platform for change drew comparisons in Indian Country with a speech Sacheen Littlefeather (Apache) made 43 years ago on Oscar night.

Like DiCaprio, actor Marlon Brandy won the best actor award for his role in The Godfather.

Unlike DiCaprio, Brando refused the award and Littlefeather gave a statement on his behalf at the 1973 event.

Like DiCaprio, Littlefeather drew attention to American Indian mistreatment and misrepresentation by Hollywood and by politicians over the protests at Wounded Knee, South Dakota.

Unlike DiCaprio, who got thunderous cheers and a standing ovation from the crowd, Littlefeather was booed, and threatened by actors standing in the wings

“John Wayne was backstage, and he became very upset at my speech, and it took four to six men to restrain him from coming to drag me off stage,” Littlefeather told Dina Gilio-Whitaker for Indian Country Today in 2012.

Like it or not, the Oscars will continue to serve as a bully pulpit for advocacy, proving, yet again, that politics infuses every aspect of our lives.

And maybe the Academy deserves the moniker #oscarsowhite when it takes a White actor to rally support for American Indian issues.

Photo credits: Image of Littlefeather from the website Africa’s Country, and DiCaprio shot from Delos.