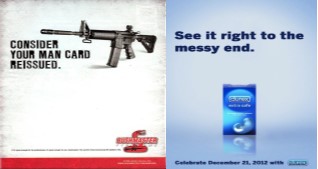 The word of the day in our propaganda class is ubiquity.

Advertising, we learned, is ubiquitous.

Borrowed from the Latin, by way of the French, ubique refers to “everywhere.”

Students understand advertising completely, offering examples from the logos on football jerseys to the display ads in college cafeterias.

Some ads are slightly more subtle, such as the paper bag that contains the medicine packed by your local pharmacy, encouraging you to buy an over-the-counter antihistamine.

This week we learned our neighbor state of Washington approved advertisements in the state parks.

The decision is borne by a lack of funding.The Tacoma News Tribune reported that Washington’s parks once received 60-80 percent of funding from the state.

Today, the state parks receive only 10-20 percent of their funds from the state.

Park personnel reassured Driscoll the ads would be tasteful.

Problem is, once you accept advertising dollars, an avalanche of unintended consequences ensue.

Take the example of North American schools that accept gifts from soft drink giants like Coca-Cola and Pepsi.

Some 80 percent of public schools now have contracts with soda behemoths, according to Mother Jones.

While schools once relied on public funds, vested interests now pay for “field trips, gym uniforms, SMART Boards and other frills that individual school budgets may not otherwise have afforded,” the magazine reports.

The New York Times links childhood obesity with state laws that require nutrition information on snacks like the ones in vending machines.

The Times reports on a study of more than 6000 students, showing a significant correlation between childhood obesity and states with less restrictive food laws.

Another unintended consequence of allowing ads in a public space has resulted in conflicts over taste, race and gender.

New York’s Metropolitan Transportation Authority (MTA) found itself embroiled in more than one controversy over ads, and ended up banning political ads.

The group bought ads on New York transit that promote the worst sort of deceit under the banner of free speech.

In one ad, Adolf Hitler is photo-shopped with a Muslim religious leader underneath the heading, “Islamic-Jew Hatred: It’s in the Quran.”

The MTA also came under fire for initially rejecting ads that feature underwear designed for women in the midst of menstruation.

The ads unabashedly state: “Underwear for women with periods.”

So: will state parks become embroiled in conflicts over advertising?

Because parks represent a public space, the issue over free speech is likely to take hold.

Imagine the following ads in your state park: