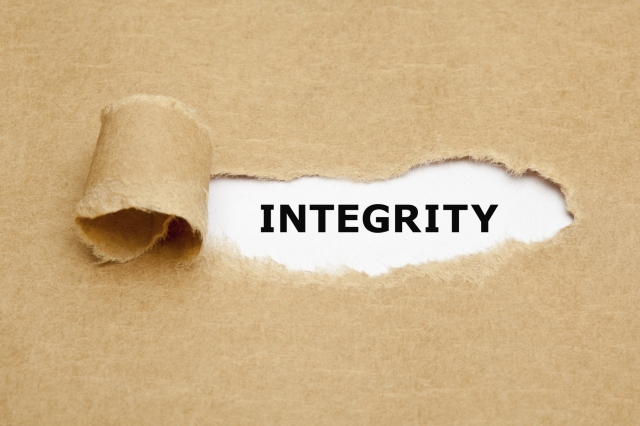 Yup: the lies, the venom, the cronyism and the bigotry repulse me.

We have buried integrity in the political landscape.

Two examples of integrity loom: one made headlines this week, and the other may be hidden from your view.

Integrity means an integrated whole, free from corruption; it means honesty; and it means virtue as it relates to truth, fair dealing and uprightness, according to the Oxford English Dictionary.

So it is no surprise that integrity was eclipsed by corruption when elected Republicans met in secret Monday evening this week (on January 2: a federal holiday)—before government officially opened for business Tuesday—and they voted to gut the powers of the ethics office without any prior announcement or publicly available agenda.

The Washington Post reported that a group of Republicans voted to strip the powers of the Office of Congressional Ethics—which works independently to investigate violations of integrity—and place the Office under the control of the House Ethics Committee.

Why does this action cause concern?

Elected officials who agreed to gut the ethics office included folks whose behaviors had been questioned: a Texas Congressman investigated for sexual harassment; a Representative from Illinois who took an overseas trip paid “improperly” by the Taiwanese government; a Missouri lawmaker who called in “friendly” expert testimony on a project in which he has a financial stake; and a New Mexico legislator whose staff member was investigated by the ethics office, according to The New York Times.

In less than 24 hours–without warning–the Republicans backed down after being “Deluged by angry phone calls and bad headlines,” according to the Times.

“Republican officials say they were well on their way to abandoning the ethics revisions” when the president-elect tweeted that Republicans should “focus instead on taxes and health care.”

The president-elect didn’t reverse the decision.

See: you can make a difference.

Corruption occurs, whether or not vigilance prevails.

This week I was reading through government mission statements for a research project and, much to my delight, I found integrity in full force.

One of our country’s Cabinet-level areas—a Department headed by an individual appointed by the US President and confirmed by the Senate—outlines ethical standards in black-and-white:

Key to maintaining public trust and confidence in the integrity of government is the adherence of high ethical standards and ensuring that government business is conducted with impartiality and integrity.

I rallied from my funk: High ethical standards, impartiality and integrity. From government.

That means the Department embraces moral principles and adheres to practices that are free from bias and corruption, according to definitions from the Oxford English Dictionary.

In addition, the federal Department:

Follows the law and holds people accountable. Accountability is a key theme: The Department expects to be held accountable [and] does not tolerate lapses that detract and distract from good, honest service to the American people.

Accountability means you are responsible for your conduct and must answer to American publics.

I interpret this phrase to mean that our nation’s Cabinet members and their staff are honest—which is to say—truthful.

I expect Cabinet members to fully disclose their activities, including their tax returns and financial interests.

The first reason is the clue that any sleuth worth her salt knows to be true: Follow the money.

When crucial decisions are made at the highest level of governance, and on behalf of all Americans, we need to ask: cui bono?

The president-elect’s Cabinet choices thus far are the richest white folks (nearly all men) ever picked, according to Slate.

And yet, a promise was made to American publics that the Tangerine Twit would “strike against the elite and special interests that have wielded disproportionate power and influence in American politics and society.”

Instead, the promise was broken: a sign of ruptured integrity.

Elite and special interests are being tapped to run the country.

I turn to the last phrases contained in the Ethical Standards treatise, which says that Cabinet decisions are:

Based on sound science and the best interest of the public. The Department promotes and supports transparency, accountability and efficiency.

Sound science means that experts knowledgeable about facts based on evidence—not beliefs that arise from opinion or special agendas—agree on truths:

Understanding data isn’t our strong suit, if we look at rankings of 15-year-old students in our country.

The United States ranks far below industrialized and so-called “second-world” (socialist or communist) countries in 29th place out of 76 countries for math and science scores.

We’re in the 38th percentile.

European front-runners include Finland, Switzerland, The Netherlands and Germany.

Our Canadian neighbors out-rank us in tenth place.

Tomorrow I look at the role of science in decision-making.

We are leagues behind developed and developing countries in terms of our childrens’ understanding of math and science.

We deserve a grade of F on our math and science scores compared to other countries.

My treatise is that our collective decisions to promote “truthiness” rather than truth makes us vulnerable to poor decisions.

By promoting gut beliefs over rational facts, we delude ourselves.

Truthiness, by definition, means we glean our truths from “what feels right.”

Problem is, our gut feelings are prone to a colorful assortment of beliefs bereft of fact.

When we bow under the weight of our felt-beliefs, we lose our perspective.

And somewhere along the lines of debate, emotion rules.

2 Responses to Bring Back Integrity