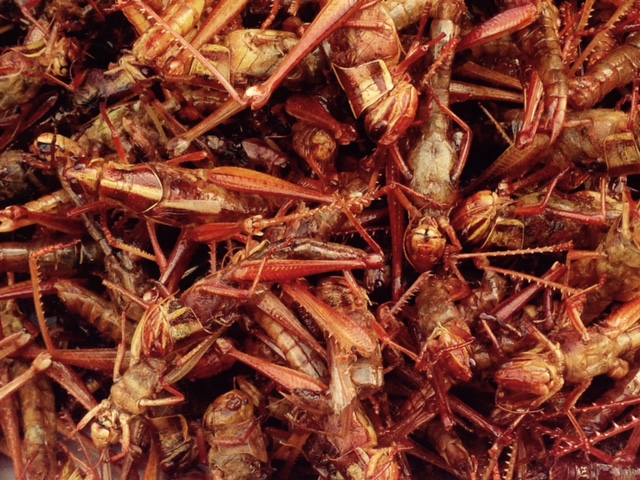 Some folks dine on dog-meat.

In Indonesia, raising dogs (and cats) is practical, according to a recent New York Times article.

Dogs and cats “require far less space and feed resources than growing cows,” says a researcher in the article.

The story gave me pause as I recently returned from a trip to Asia.

I’m pretty sure I avoided dog and cat meat during my visit, but I found plentiful fried insects in the Chinatown section of Bangkok.

When I visited China several years ago our youthful tour guide was keen on the prospect of capitalism, and described himself as an entrepreneur.

He explained that he was going to start a new venture, raising dogs for food, and I asked him what type of dogs.

Without a trace of irony, he replied, “Chow dogs.”

My Lakota relatives face jokesters because of their custom of eating dogs.

The comedian Raven Heavy Runner’s (Blackfeet) alter-ego, Annie Two Balls, tells a humorous story about a hungry Lakota man who tries to con a Dine shepherd into giving him one of his sheep.

The punchline has the Lakota scooping up an animal in his arms for supper.

But it turns out he had taken the dog rather than the sheep.

Francis Parkman wrote a memorable passage about a supper with tribal folks in his book, The Oregon Trail.

Parkman and his troupe visit the lodge of Old Smoke (who was a bitter enemy of my ancestor, Mahto Tatonka), and writes:

Smoke’s eldest squaw entered the lodge, with a sort of stone mallet in her hand.

Parkman notices a litter of black puppies, and the woman grabs one:

By the hind paw, she dragged him out, and carrying him to the entrance of the lodge, hammered him on the head till she killed him.

The squaw, holding the puppy by the legs, was swinging him to and fro through the blaze of a fire, until the hair was singed off.

This done, she unsheathed her knife and cut him into small pieces, which she dropped into a kettle to boil.

In a few moments a large wooden dish was set before us, filled with this delicate preparation.

We felt conscious of the honor.

A dog-feast is the greatest compliment a Dakota can offer to his guest; and knowing that to refuse eating would be an affront, we attacked the little dog and devoured him before the eyes of his unconscious parent.

The supper story sticks with me as I imagine the pup swinging from side to side.

2 Responses to Pets for Supper?