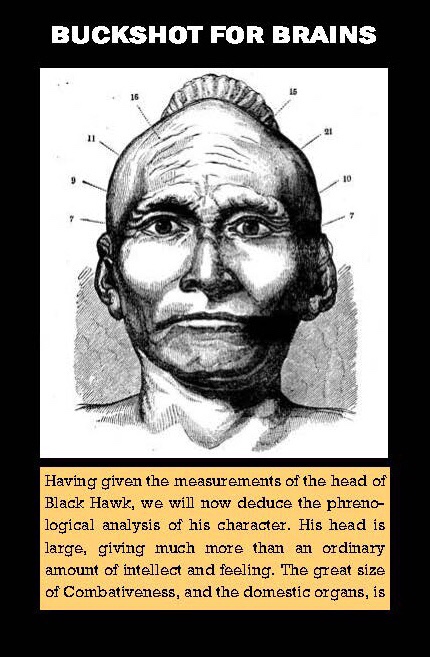 To test for intelligence in the 1800s, scientists would scoop out the brains from a skull, and then fill the cavity with buckshot.

Americans–lumped together as natives of North and South America–were judged inferior to their global brethren.

Phrenologists studied the skulls of Indians, thanks to grave-robbers who could earn cash for sending crania to eager scientists.

Scientists declared the skulls demonstrated their inhabitants as warlike and aggressive.

But we were also characterized as lacking the ability to be civilized.

No written language and no religion–popular lies–provided the evidence that native people were incapable of civilization.

Armed with this “science,” politicians, railroad builders, business-folk and the military seized the opportunity to wrest lands from the first inhabitants, declaring that our minds lacked the skills to manage our own destinies.

And yet, the entailments of phrenology stick even today.

Here are some concrete examples:

1. Humans are still classified as racial types, despite agreement in scientific circles that we all belong to the same race

2. More variation occurs within “racial” types than across “racial” types, which means there is more variety among Indigenous people and more similarity between, say, natives of the British Isles and the Shoshone

3. We still judge people by the way they look, letting our stereotypes get in the way of critical thinking

4. American Indian bodies, bones and skulls continue to be stolen and studied, despite laws that protect remains and artifacts

My thanks to the Northwest Native American Research Center for Health for inviting me to share my work on science and culture this week.