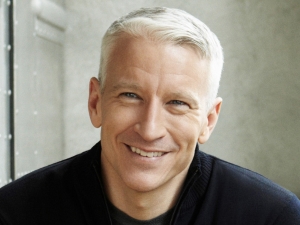 Combing the web earlier this week I was looking for squibs on Anderson Cooper.

My job was to introduce him to students and faculty for an informal question-and-answer session.

Armed with facts about his life and work—he studied political science at Yale, reported on uprisings in Burma, works concurrently for CNN and CBS—I decided to cut my speech short.

Students were eager to hear him, not me.

But I found out something about Anderson Cooper from an unexpected source.

Turns out Cooper stuck a peg into the coat-rack of pop culture.

I discovered the peg while getting ready for work.

Brushing my hair I pulled up Netflix to watch Rules of Engagement, a TV situation comedy about modern relationships. My guilty pleasure.

One of the guest characters (played by the Mad-TV alumnus Orlando Jones) is answering questions about being gay.

Can I ask another question? queries Jeff (Patrick Warburton’s character).

Jones says, All right. As long as it’s not another one about Anderson Cooper.

Quite a serendipitous moment when you figure I was getting ready to meet Cooper.

Turns out that same day Cooper landed on another piece of pop culture real estate.

The New York Times crossword puzzle paid tribute to Cooper, which my colleague Michael Clark, a professor of English, pointed out during the Q&A.