A different kind of heirloom 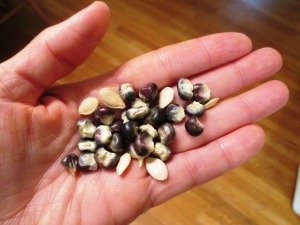 My relative Leaf gave us an heirloom while we were visiting Oklahoma.

It’s the sort of heirloom whose value unfolds in a material way.

I’m not talking about materialism—the need to acquire stuff.

Rather, this heirloom recalls the past in a somatic fashion.

She gave me a small handful of corn kernels and squash seeds, descendants of crops American Indians grew in that part of the country.

Packed lovingly in a piece of Pendleton blanket cloth, some of the seeds will be planted in our garden this year and we will save the others for next spring.

The corn and squash will be our reminders of the June homecoming in Grayhorse, where Osage relatives gather to share meals, stories and dances.

It’s the best kind of memory—one that binds the present with the past.

1 Response to A different kind of heirloom