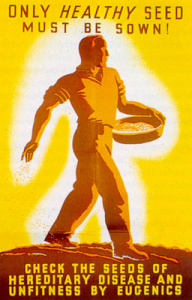 The disenfranchised among us have a history of distrusting science.

Some scientists just don’t get it: how can you overlook evolution? Climate change? Diabetes?

Native Americans—and African-Americans and Hispanics—can point to specific examples when the mantle of science caused harm.

My perspective is one of rationality.

But not the way you think.

Scientists don’t own the corner on rational thought. Some reactions of the disenfranchised stem from real evidence of abuse.

Distrust of science is actually a rational reaction to abuse that began centuries ago and continues to linger.

Is it any wonder that some African Americans distrust researchers when they learn that health care workers in Alabama treated World War II veterans for syphilis using placebo “drugs” rather than antibiotics?

Can you blame distrust of scientists who sterilized American Indian women without their knowledge (as recently as the 1970s) in Albuquerque, Oklahoma City and Phoenix?

How about the campaign in the 1910s designed to “Save the Babies” in the name of “scientific motherhood” by removing children from Indian homes?

Between a quarter and a third of all American Indian children had been placed in institutions, foster families or adopted out, according to Inside, a publication at California State University, Chico.

So, it’s not really a question of the disenfranchised not believing in science. Rather, it’s a lack of trust in scientists bolstered by evidence of violence and injury in the name of science.