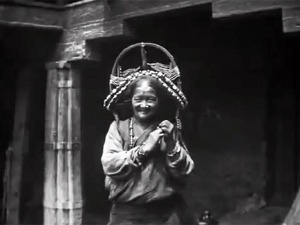 Tibetan woman from the Epic of Everest

Ninety years ago John Noel joined a group of determined mountaineers to capture on film their adventures climbing Mount Everest.

Noel’s 1924 silent film has been refreshed and recently celebrated a North West premiere to a packed house.

And while the press coverage of the film will undoubtedly center on the lives that were lost (climbers George Mallory and Andrew Irvine, and porters Manbahadur and Shamsherpun), the celluloid story also offers up images of the Tibetan people eating, praying, working and lounging.

Like the documentary Nanook of the North, recorded in the same time period–and essential viewing for film students everywhere–The Epic of Everest assumes the perspective of the outsider’s gaze.

In one scene, a mother rubs yak butter on her child (a practice to protect the skin in inclement weather) and we see the naked cherub dozing in the sun.

Another scene shows a group dancing, intercut with a man playing a stringed instrument, and a flock of Tibetans twirling prayer wheels.

The photographer seems unaware that religion underpins part of the performance he captures on film. He notes in the scripted titles placed within the scene:

We cannot call them a musical race, but a place for some of their instruments could be found in our modern orchestras.

How odd-sounding today that their music is held in such low regard and that the indigenous culture would be considered a “race” different from the British mountaineers.

We see local women churning butter and spinning woolen thread while a fire is stoked—activities not that much different from most of our own ancestors.

The camera’s gaze settles on a woman of some nobility, judging from her dress and jewelry. The filmmaker notes:

The silver and turquoise amulet box, stuffed with charms, grotesque remedies, powdered lizards, dried blood and toe-nail parings of a venerable lama will ward misfortune from her life.

The observation reminds me of Francis Parkman’s descriptions of the Sioux on his trek in western North America through Indian country in the mid 1800s.

He describes Indian half-breeds as “a mongrel race,” some with their hair “saturated with red paint, and beplastered with glue to their temples.”

No surprise that the writer and filmmaker view the foreigner through a personal lens.

But what is surprising is how we take for granted that this perspective serves as the benchmark for how we judge others.