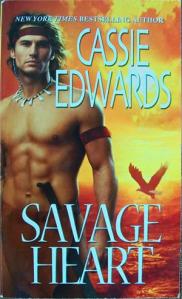 While we chip away at the topic of stereotypes, you should know the brave, stoic warrior still lives.

At least in paperback.

First daughter Wak-O-Apa (Megan) alerted me to the paperback romance genre featuring Indian braves. As a college English major, she discovered the novels in one of her classes.

The first give-away is a buff, shirtless, tanned and sculpted American Indian brave gracing the cover of a book with titles like:

Looking for an excuse to read the lusty books, I incorporated them into a class I teach on Mass Media and American Indians that includes investigation into films, television, books, newspapers and other forms of communication focusing on or crafted by indigenous peoples.

We discovered the books tend to center on a common story:

Ivory-skinned, blue-eyed female settler escapes capture from unshaven ruffians-cowboys-miners and finds herself lost in the woods-prairie-desert, where she is rescued by the chief’s son and taken back to camp.

Blue-eyed female must prove herself worthy to the jealous native women while winning the heart of the handsome brave who found her.

The Indian and stranger communicate through their passion rather than language.

An eagle-spider-panther cements their relationship with a sign from the creator that the two lovers were destined to be together. The Chief accepts the sign and everyone lives happily ever after.

I discovered that Portland’s favorite bookstore, Powell’s, features an entire armory of lurid paperbacks, and not just about Indians.

The stereotypes continue to thrive.

Image of Native American bodice-ripper written by Cassie Edwards, one of the genre’s most popular authors. From the website http://www.goodreads.com/author/show/29440.Cassie_Edwards